For the three days from March 29 to 31, 2018, an international symposium with the title of “Technologies of East Asian Performance” was held at the University of California, Los Angeles (UCLA). The symposium was co-organized by UCLA and Waseda University’s Global Japanese Studies Model Unit of the Top Global University Project and was part of the Tadashi Yanai Initiative for Globalizing Japanese Humanities. On the first day of the three days, the 29th, Waseda University Tsubouchi Memorial Theatre Museum Associate Director Ryuichi Kodama (professor, Faculty of Letters, Arts and Sciences, Waseda University) conducted a workshop, “Technologies and Methodologies in Japanese Theater Studies,” ahead of the actual symposium. At the workshop, Professor Kodama discussed the collection of documents, exhibitions, events, research, and publication that take place at the Theatre Museum and explained, with the aid of video, how the museum allows members of the public to access documents in its possession using a digital archive collection. Additionally, the professor described documents relevant to Japanese theater studies in detail and touched upon topics including a display system for kuzushiji (a cursive style of writing used in centuries past) newly available for the public to view such texts and—as examples of theater studies in Japan—“Cho-Kabuki” and other attempts at combining cutting-edge technologies with traditional Japanese performing arts. UCLA Associate Professor Michael Emmerich and University of Southern California (USC) Associate Professor Satoko Shimazaki interpreted the first and second halves of the workshop. The attendees listened intently to Professor Kodama’s detailed but easy-to-understand lecture. 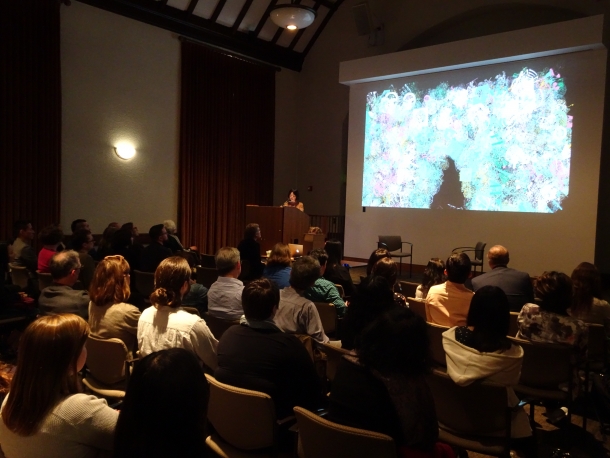 That evening, writer Yoko Tawada, poet Keijiro Suga, and computer programmer Matthew Fargo put on a performative reading event. At this reading, which was titled “Common Confusions,” AI programs were employed to perform multilingual readings of numerous works by Tawada in English, Japanese, and German, among other languages. These AI readings and the live readings conducted at the venue enchanted the audience.

The symposium proper was held on the 30th and the 31st.
On the first day of the symposium, Michael Emmerich and Satoko Shimazaki provided some opening remarks, and after the objectives of the international symposium were explained, presentations by scholars commenced.
In her presentation, Ms. Shimazaki used examples such as the performers Onoe Kikugoro V and Enu Sanyutei and the texts Mukashi Moyō Gekijō Hinagata and Gekijō Setsuyōshū to describe the roles that woodblock books and print culture played in kabuki and other early modern performances at the start of the 19th century, as well as how these phenomena are connected to the performing arts of today.
Next, USC Assistant Professor Kerim Yasar took up the topic of post-war Japanese cinema—including Akira Kurosawa’s Kagemusha and Yasujiro Ozu’s Late Spring—in his presentation and discussed the gesturing of the characters appearing on screen, in particular, considering how the same actors expressed gave expression to their acting under the direction of different directors.
In his presentation, University of Washington Assistant Professor Jang Wook Huh related the history of the intelligentsia of the Korean Peninsula translating works by black authors as a way of speaking out in place of Korean literature during the peninsula’s period of colonization and described the techniques of inter-ethnic cultural borrowing, expression, and circulation, as demonstrated by Korean-language translations of black literature. In a similar vein, University of Rochester Assistant Professor William Bridges then gave a presentation about the boarder-transcending influence of hip hop-era black culture on Japanese literature. In the afternoon session, UC Berkley Associate Professor Weihong Bao discussed research into stage-setting in early 20th-century China, and New York University Assistant Professor Hentyle Yapp considered fireworks as an artistic medium in post-socialist Chinese society and the political role that such fireworks performances play.
Afterward, University of Notre Dame Assistant Professor Tarryn Chun focused her presentation on a theater troupe based in Beijing and used the example of the huaju (a style of Chinese realist theater) piece Thunderstorm 2.0 to discuss the technology employed in contemporary Chinese theater and live performances, and Temple University Associate Professor Noriko Manabe gave a presentation that discussed the music used in political demonstrations in Japan, discussing the background to, and history of, how this music took on the role of a political tool and the existence of performer-speakers who participate in demonstrations.

The following day, the 31st, McGill University Assistant Professor Michelle Cho gave a presentation on how, through K-Pop dance videos uploaded to YouTube, the actions of fans have overturned the old conventional wisdom regarding pop culture and have formed communities. So-Rim Lee, a graduate student at Stanford University, presented on queerness as performance via the cosmetic surgery featured on South Korean reality shows. UCLA Assistant Professor Michelle Liu’s presentation was on the words expressed through the gestures and poses of those who wear “Gothic and Lolita” fashion.
Next, UCLA Associate Professor Sean Metzger discussed the productions of Zhang Yimou (a Chinese film director who worked on the closing ceremony of the Pyeongchang Olympics) and considered the costume effects and audience techniques employed in those productions.

In the afternoon session that concluded the scholarly presentations, Yonsei University Professor Miseong Woo and Dartmouth College Associate Professor Eng-Beng Lim noted how architectural structures in South Korea and Singapore can function as means of deciphering the two countries’ pasts and presents. Professor Woo employed the example of Seoul’s Dongdaemun Design Plaza (DDP), which is said to have helped forge South Korea’s national identity. Meanwhile, Associate Professor Lim described the role that the unique architecture of Singapore has played as a form of visual art.
At the end, there were closing remarks by UCLA Professor Suk-Young Kim: “Creativity is closely related to technology; the two are inseparable. Performances are no exception: Although there are a multitude of issues relating to East Asia, which has achieved rapid development, that have yet to be considered, I expect that we will see future research along these avenues.” With that statement, the two-day symposium drew to a close.

All 14 of the research presentations—which covered a wide array of topics, including modern theater, Japanese cinema, K-Pop, and Chinese huaju theater—were dense with information, and in each of the four discussion sessions, each question primed the pump for the next. There were many productive exchanges of views at this symposium thanks to the diverse fields of the researchers who participated, and the venue was filled with a lively atmosphere from start to finish.

A Graduate Student Roundtable was organized in addition to the workshop and the symposium. Around 30 doctoral candidates and others affiliated with Waseda University, UCLA, and USC—as well as Harvard University, Yale University, the National University of Singapore, and other institutions—assembled in one room, and these young scholars each discussed their research in their various fields of study, including East Asian theater, film, literature, and performances, and shared information with one another. In particular, seven students sent from Waseda University gave detailed presentations on the findings of their studies, the topics of which consisted of kamigata kabuki (kabuki as it was traditionally performed in the region around Kyoto and Osaka), musicals based on graphic novels in the horror genre, the kabuki version of Twelfth Night (based on the play by Shakespeare) directed by Yukio Ninagawa, the staging of playwright and director Oriza Hirata, Japonism in contemporary ballet, dojojimono (kabuki works that involve dancing and take inspiration from a Noh play), and Japanese cinema. At this space for learning carefully led by the roundtable’s organizer, these students conveyed to the other attendees the techniques employed in, and other aspects of, Japanese theater studies and were stimulated with new knowledge of the state of performance studies in other countries through their interactions with the students from the other universities. It appears certain that this valuable opportunity for interaction and networking among the young scholars who participated and who will be the next generation of leaders in their field will contribute greatly to their subsequent research endeavors.