Message from the Director

Message from the Director 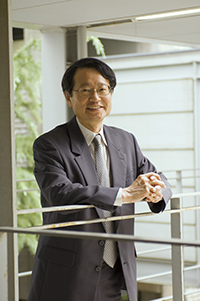 We live in a world where people and information cross national boundaries, fostering a new culture that weaves together cultural attributes of various countries and regions, right down to the level of our daily lives. The formation of a distinctive new culture through the interaction of people and cultures was evident even in the Edo period (1600-1867). In fact, such interactions and transformations have been part of the perpetual process of cultural formation throughout the history of Japan. Nevertheless, globalization is accelerating, and the speed of transformation has become remarkably faster. In this climate, there have been strong calls for the reexamination of Japanese culture from genuinely global perspectives.

The Ryusaku Tsunoda Center of Japanese Culture has been established to become one of the global foci of international scholarly networks on Japanese Studies, with the goal of promoting scholarly exchange and disseminating knowledge concerning Japanese Studies in the Humanities. The Center is housed in the Research Institute for Letters, Arts, and Sciences at Waseda University.

In 2014, Waseda University was selected as one of the institutions to carry out the government-funded Top Global University Project. The project provides support for universities with the capacity to lead the effort to globalize Japanese higher education through pioneering and experimental means, in collaboration with top universities in the world that have successful records of education and research. The Ryusaku Tsunoda Center of Japanese Culture is one of the primary bases for Waseda University’s Top Global University Project, and is anticipated to become an important contact point for the field of Global Japanese Studies.

The Center is named after Ryusaku Tsunoda, who studied literature under Arthur Lloyd and Tsubouchi Shōyō at Tokyo College (Tokyo Senmon Gakkō), the predecessor of Waseda University. After graduation, he worked as a middle school teacher for a period, and subsequently traveled to the United States. In 1928, he founded the Japanese Culture Center of America at Columbia University, the first research institution devoted to the study of Japanese culture in the United States. He taught at Columbia University for thirty-one years, from 1931 to 1962. According to Donald Keene, “when you say ‘Sensei,’ that automatically means ‘Tsunoda sensei’” at Columbia University, where Ryusaku Tsunoda’s legacy has continue to be passed down to this day.
Through the tumultuous period of Japan’s modernization, Ryusaku Tsunoda engaged in a sincere examination of Japanese society from political, social, cultural, religious, and various other perspectives. Fluent in English and with a deep knowledge of classical Japanese texts, he is said to have enthralled his students at Columbia University with the extensive breadth of his knowledge. In his later years, he half-jokingly noted that he “would like scholars in Japan to come to Columbia University to conduct research on Japan.” Abiding by his firm educational principle that Japan must be examined properly from the distant perspective of the United States, he fostered younger generations of scholars of Japanese Studies.
Ryusaku Tsunoda strove to globalize research on Japanese Studies some eighty years ago. In promoting scholarly exchange and the dissemination of knowledge of Japanese Studies, we have named our new research center after this pioneering scholar, seeking, in the legacy of his endeavor, the starting point on which to build our effort toward the successful achievement of our mission.

The Ryusaku Tsunoda Center of Japanese Culture promotes both research and educational activities in collaboration with the Department of East Asian Languages and Cultures at Columbia University, as well as with the Department of Asian Languages and Cultures at the University of California, Los Angeles (UCLA).
The Center’s activities include: developing and promoting global-standard research models for the field of Global Japanese Studies on a worldwide scale; creating a new graduate program on par with global standards; facilitating seamless interaction between students and faculty members; conducting international collaborative research and holding international symposiums and workshops; and producing bilingual publications. The Center will develop a research alliance among the world’s top scholars of Japanese Studies, and will create what may be called a “multi-directional migratory system of knowledge,” with Waseda University as the “homeport” that connects students with scholars thriving on the world stage.

Japan has a unique cultural heritage, in which texts and other historical materials have been handed down for over a thousand years through one shared language. On the other hand, universal elements of scholarly inquiry are also found in Humanities research conducted in Japan based on such resources. This body of material should not be grasped in a static fashion that treats it as a collection of fixed and separate products of history. It needs to be examined as part of dynamic processes of cultural formation and transformation arising out of interactions with diverse cultures of the world. This dynamic approach will lead us to critical explorations of various aspects of Japanese culture as parts of the world’s cultural networks. With this in mind, we will present analyses of the constant creation and transformation of Japanese culture in both Japanese and English, contribute to the development of new images of Japanese culture across the world, and strive toward the creation of novel cultural values