Waseda University established the Global Japanese Literary and Cultural Studies (Global-J) (Doctor’s Program) in the Graduate School of Letters, Arts and Sciences on Sep. 21, 2018. Global-J is to realize a new vision in global Japanese literary and cultural studies, aiming to rethink Japanese culture from a truly global perspective and to disseminate its outcomes based on the Top Global University Project (SGU), Waseda Ocean initiative. The aim of Waseda Ocean is to establish research and education systems for creating the future with an eye toward Waseda Vision 150 and promoting complete internationalization in research and education.
The aim of Global Japanese Literary and Cultural Studies (Global-J) is to bring together the methodologies and outcomes of Japanese literary and cultural studies that have been developed in both Japan and other regions of the world, to conduct interdisciplinary education and research activities both in English and Japanese, and to create new Global Japanese Literary and Cultural Studies under the guidance of leading researchers active in the front line of education worldwide. Global-J will produce scholars and educators who will lead the future course of Japanese literary and cultural studies on the international stage.

Since its literary studies course was established by Shoyo Tsubouchi and others in 1890, Waseda University has been a driving force in the humanistic and cultural science scholarship on Japan’s various cultures. . In 2014, the university established a plan to promote globalization of its Faculty of Letters, Arts and Sciences aimed at setting a global standard for the humanities based on the Waseda Vision 150 future initiative. The new program in Global Japanese Literary and Cultural Studies (Global-J) now being established in the Graduate School of Letters, Arts and Sciences, represents an innovative venture that will crystalize and realize the goals of these initiatives.
Global-J will offer postgraduate training that meets the highest international standards in order to develop excellent scholars who are also first-rate teachers that will meet the needs of universities around the world. In cooperation with internationally acclaimed participants, Global-J conducts education and research activities both in English and Japanese—including interdisciplinary research guidance and course work—and will utilize its connections with leading universities around the world to provide first-rate training.
The university plans to launch a doctoral program first in September 2018, followed by a master’s program to be launched by fiscal 2021. The master’s program is generally considered as being a part of a five-year a doctoral course, with its students in principle continuing on in the doctoral program. However, students will also have the option of from completing only the master’s program or of entering directly into the doctoral program from the start.

Global-J develops human resources who are fully capable of participating in overseas English-language scholarly environments, grounded in the scholarly accomplishments in Japanese literature and culture of Waseda University. In contrast to existing conventional Japanese-language courses in Japanese literature, which aim to produce research papers for Japanese-language academic journals and to place graduates in Japanese-language education institutions, Global-J aims to disseminate English-language research that proactively incorporates European and American literary theories and comparative literary methodologies in addition to strong foundations in existing Japanese literary and cultural scholarship. Global-J also aims to train researchers who will support emerging new fields in European and American studies of Japanese literature and culture.
Lectures and research guidance are provided both in English and Japanese; however, dissertations should as a rule be written in English.

（１）Mentoring by cutting-edge scholars from around the world
Global-J invites leading scholars from around the world to mentor its students. In addition to full-time dedicated faculty members, Global-J through its joint appointment system promotes collaborative education and research with scholars who are playing leading roles around the globe. Moreover, Global-J offers coursework in both English and Japanese, including a range of classes that provide the full range of knowledge, the flexible tools, and the repertoire of skills needed to become researchers and educators who will become future leaders of Japanology on the international stage.

（２）Making full use of the scholarly accomplishments and resources of Waseda University
Waseda faculty members in Japanese literature and other relevant fields jointly provide mentoring, and Japanese-language coursework and scholarly training. The students of Global-J enroll in lecture coursed together with the students from Waseda’s Japanese-language Japanese literary course, as well as participating in joint workshops and other relevant scholarly activities. Global-J fully capitalizes on the geographical advantage of its location in Tokyo, the capital of Japan, and it takes full advantage of the intellectual resources accumulated through the more than 125-year history of literary studies programs at Waseda University.

（３）The Fields of Global Japanology
Japanese literary studies can provide a starting point for other relevant fields of Japanology (including Japanese language, Japanese history, theater, art history, subculture studies, among others). In concrete terms, Global-J maintains a focus on fields essential to Japanology such as literary and critical theory, media studies, translation studies, world literature, history of writing systems and literacy, Japanese and comparative mythology, theater and performance studies, as well as on other emerging new fields of scholarship.

（５）Studying abroad and overseas cooperation
Waseda University has conducted a double degree program for Japanese literature with Columbia University since 2008. Moreover, the university has promoted cooperative programs such as exchanges of students and teachers with UCLA under the Tadashi Yanai Initiative for Globalizing Japanese Humanities since 2014. As a top global university project, Waseda University’s Graduate School of Letters, Arts and Sciences has established a network of global Japanese literary and cultural studies with Columbia University and UCLA as hub universities since 2014. The education and research activities of Global-J are likewise conducted in cooperation with these overseas research institutes that are world leaders in the field of Japanology.

（６）Cooperation with the Ryusaku Tsunoda Center of Japanese Culture
The Ryusaku Tsunoda Center of Japanese Culture was opened in January 2015 in Waseda University’s Research Institute for Letters, Arts and Sciences as a global center for Japanese literary and cultural studies with the mission of promoting the dissemination and exchange of humanistic scholarship in the field of Japanology. Since then, Waseda University has regularly hosted faculty from the Department of East Asian Languages and Cultures of Columbia University as well as doctoral graduates from that department who now teach at European and U.S. universities, working with them to establish a nonpareil joint research network involving the world’s top researchers. The students of Global-J make full use of this knowledge migration system that connects participating universities through Waseda University as its central hub, participating in workshops and symposiums and presenting research findings in both Japanese and English.

（８）Season for entrance
Applicants choose to enroll starting in either April or September. 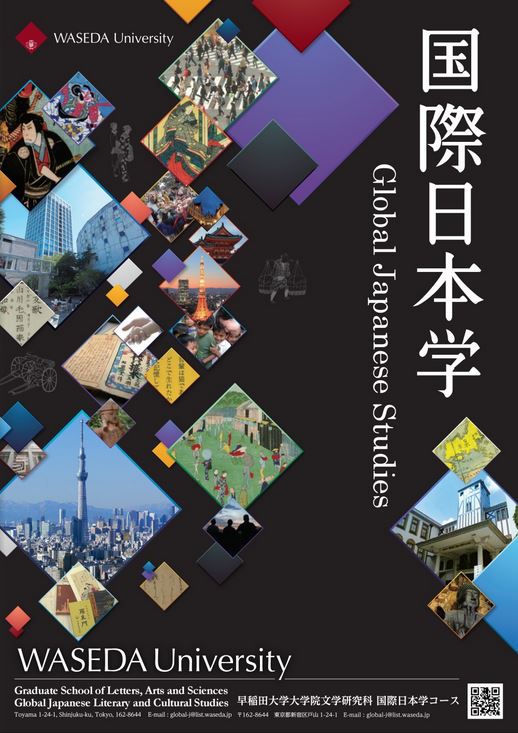 Students under the age of 30 as of April 1st of the year of enrolment are eligible to apply. As of the 2019 academic year, students in the Graduate School of Letters, Arts and Sciences are offered financial support ranging from 250,000 to 400,000 yen per year. Furthermore, during your period of studies there will be opportunities to serve as a
TA, LA, or Research Associate.